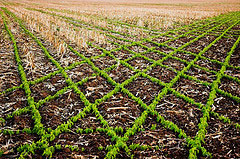 by Rick Ryan - Envisn, Inc.
Managers or administrators are often faced with the task of consolidating or merging Cognos BI environments. This may result because of mergers, cost savings or simply a desire to have fewer environments to manage. Invariably the consolidation involves users and content that will be merged into a new or existing environment and this requires careful planning and flawless execution in order to be done successfully. The purpose of this article is to help you identify what you need to know and how to plan and execute a successful merger of Cognos environments.

Scoping out the merger

The first thing you need to do is to scope out the environments to be merged. This requires a lot of detailed analyses in order to get the data needed to prepare a plan. Some of the things you will need to know include:

If this involves more than two environments that are being merged you will need to get the same information for the others as well. In many respects the task will be significantly easier if there is no overlap between users and content between the environments to be merged. Why? See the diagrams below: 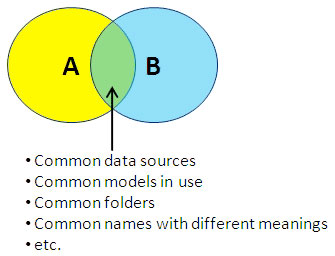 Similar or Overlapping Environments: In the above diagram both source and target are similar raising the possibility for multiple issues on common data sources, folders, models, etc. Identifying and resolving these issues can be tedious and time consuming but absolutely necessary for a successful merger.

Once you have collected the information you will need to identify and layout the key tasks to be done and get them in the right sequence. Most problems in a project like this occur when key steps are missed or placed in the wrong order. The planning should include:

If you want to avoid the “big bang” approach of a deployment and do the merger in a more controlled manner you can use a product like NetVisn which allows you to simply move the content from the source to the target at a measured pace. And if you have to move hundreds, or even thousands of users, this can be a huge risk reducer. It also has the advantage of validating all objects as they are being moved to insure that all dependent objects are moved together and that they actually work in the new environment. Using a deployment package is an “all or nothing” approach that can instill fear in even the most careful planners. But for many this may be the only alternative.

Merging or consolidating Cognos environments can be a challenge even if they are small of mid-sized. In a large environment the difficulties are magnified. Creating a plan that reflects the specific needs of the environments to be merged is essential for success. Using tools that make the task easier and minimize risk can help insure success and reduce the time and effort involved.